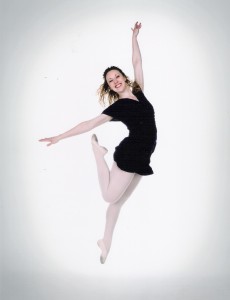 Aside from performances with our studio, she has also danced with the Festival Ballet Company in THE NUTCRACKER SUITE to “Waltz of the Flowers,” “Mice,” “Party Parent,” “Arabian” Corp and “Snowflakes” and THE NUTCRACKER SUITE with Dance Alive! From Gainesville, FL as “A Friend of Clara” in the party scene and a “Mouse” in the battle scene.

When the Missoula Children’s Theater came to town in 1995, she won the role of Gwendolyn, the “Magic Harp” (the only solo dancer) in JACK AND THE BEANSTALK.

She has also done special performances at weddings, churches, pageants, birthday parties and other events.

In 1997, aside from dancing and teaching at our studio, she joined the Festival Ballet Company as a soloist and has performed various roles including Trepak (Russian), Rag Doll, Candy Cane and Mirletons in THE NUTCRACKER SUITE, the Crystal Fountain Fairy and Pas De Trios in THE SLEEPING BEAUTY and second and fourth variations in BEAUTY AND THE BEAST which toured in Rome and Macon, GA. She has also performed at the South Eastern Regional Ballet Association (S.E.R.B.A.) in Germantown, TN and Greenville, SC. During workshops there, she studied with Kathy Thibodeaux (Director of BALLET MAGNIFICAT), Michael Tevlin, Jon Rodriguez, Gillian Davis and Laura Alonso.

And in 2007 she joined the teaching staff at Tumble ‘N Dance in Stockbridge where she continues to teach ballet to all of the competition teams, as well as pointe and tap.

She is also the Performing Arts Director at her church, Living Faith Fellowship where she is the teacher/choreographer for the Seasoned Faith Dancers, a Children’s Church teacher and on the Voice of Triumph praise and worship team.

Past and present hobbies include artwork, acting, going on mission trips, and playing the piano. A 1998 graduate from twelve years of homeschooling, she is honored in the 1996-1997 and 1997-1998 editions of Who’s Who Among American High School Students. Married to Michael McGuire in 2007, “Miss Tiana” and her husband had a son in 2012 and a daughter in 2016 whom they named Jonathan and Jenelle.